About Pontiac Paint - Our History

The Pontiac Paint Company represents four generations in the paint business. William Warrilow (grandpa) arrived in the U.S. from England in the early 1900s. After working for a time to help build the Erie Canal, Mr. Warrilow heard that Henry Ford was hiring in Detroit. Grandpa arrived in Detroit too late to get a job with Ford, and ended up working as a varnish maker at the Pontiac Varnish Company. Grandpa worked under trying and dangerous conditions in the early days. Old timers in Pontiac can remember the terrible smell in town on the days that grandpa cooked varnish. Grandpa retired in the 50s and moved to Pompano Beach, Florida.

In 1948, Jack Winfield and David Warrilow (brothers-in-law) formed Warfield Paint Company. They had been spraying summer cottages at Higgins Lake, Michigan with a product called "Log Spar" which was manufactured by the Pontiac Varnish Company, here in Pontiac, Michigan. They attempted to purchase it wholesale but were told that only paint dealers could buy it wholesale. Jack was a salesman at the time and David was employed in a paint laboratory at GMC Truck. How could a combination such as that not make it as paint merchants? They purchased a house on Woodward Avenue in Birmingham; moved three years later to a store front one block closer to town; and seven years later they moved to 136 N. Woodward in the center of town. David left the business and moved to Florida.

Jack and his wife Ruth (Warrilow) operated the store until 1975 when they sold it and moved their operation to our present location at Woodward Ave. and M-59 (Huron St.), which they bought in 1963. Jack and Ruth had two sons, Douglas and Gordon, who now operate the business under the name of Pontiac Paint Company. Jamie Winfield (Gordon's daughter) entered the business in 1996. 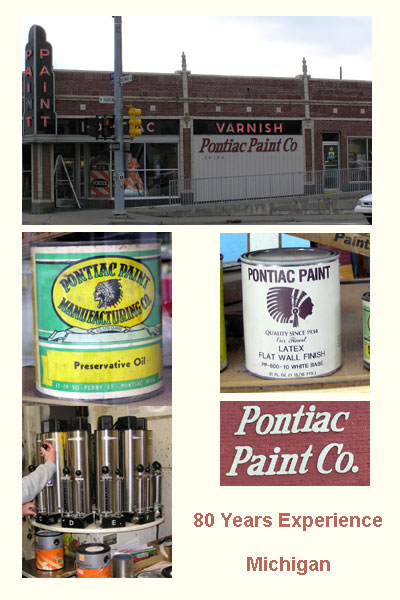